Concrete abstraction. The dyad underpinning the work of British painter Victor Pasmore is brought to life in the Spring Summer 2019 collection imagined by Gabriele Colangelo for Giada. Matter is lightened, volumes are airy, shapes are diluted into liquid undertones, while fine strokes create delicate graphic elements on a moving body. 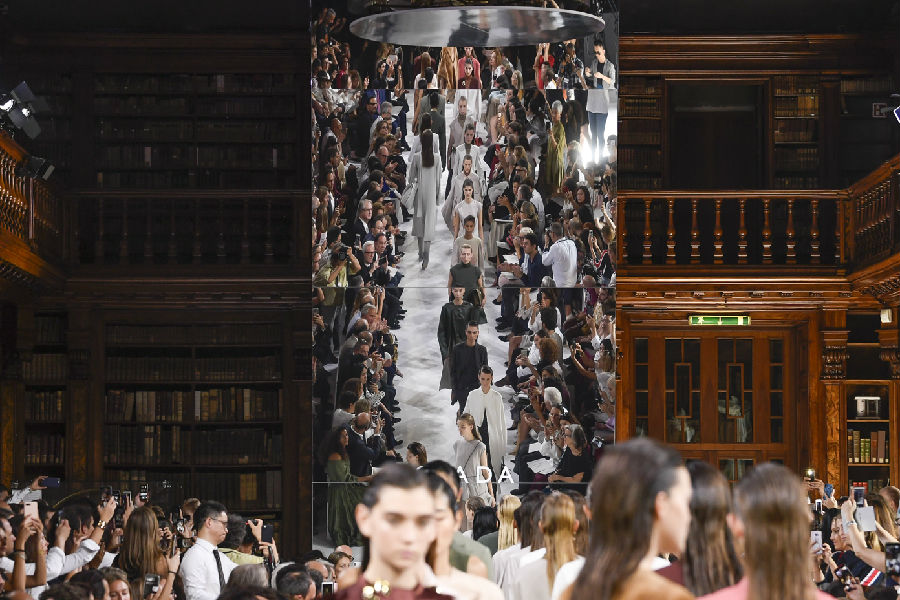 A decorative element transforms into constructive weaving the thread of this narration of style. Pleating: a technique that takes center stage in the collection animating the surface of skirts, blouses and pant suits, leaving their masculine connation behind. Opening up as a fan, pleats are experimented on different fabrics; from the silk-nylon combination that illuminates the body with iridescent effects that refract the light, to ultra-light tri-lobed knitwear in the shades of green, bronze and copper, and plonge leather used for a reinterpretation of the trench coat. 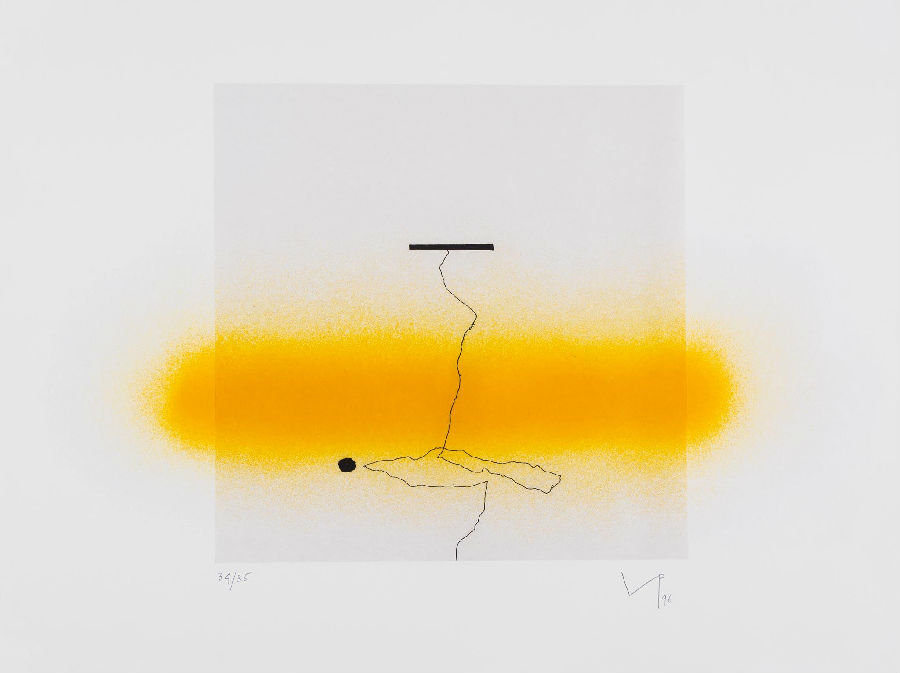 Pasmore’s pictorial shading finds in pleating its highest expression. Illuminated by ice-green, tarmac, camel, burgundy and coral accents, Giada’s signature white paces the succession of looks while mingling with the ombre effect presented through the three key colors of the collection - gray, pink, and green. 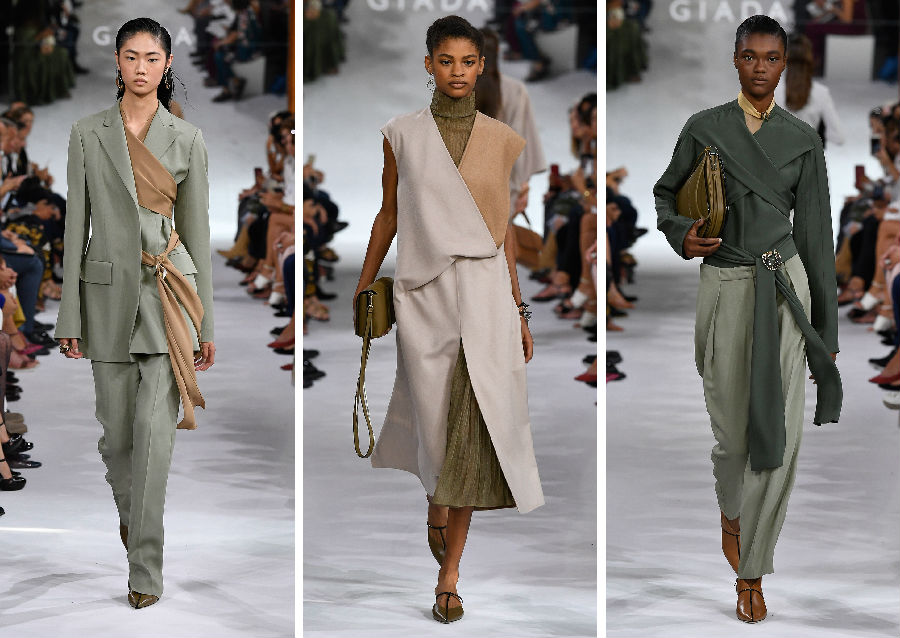 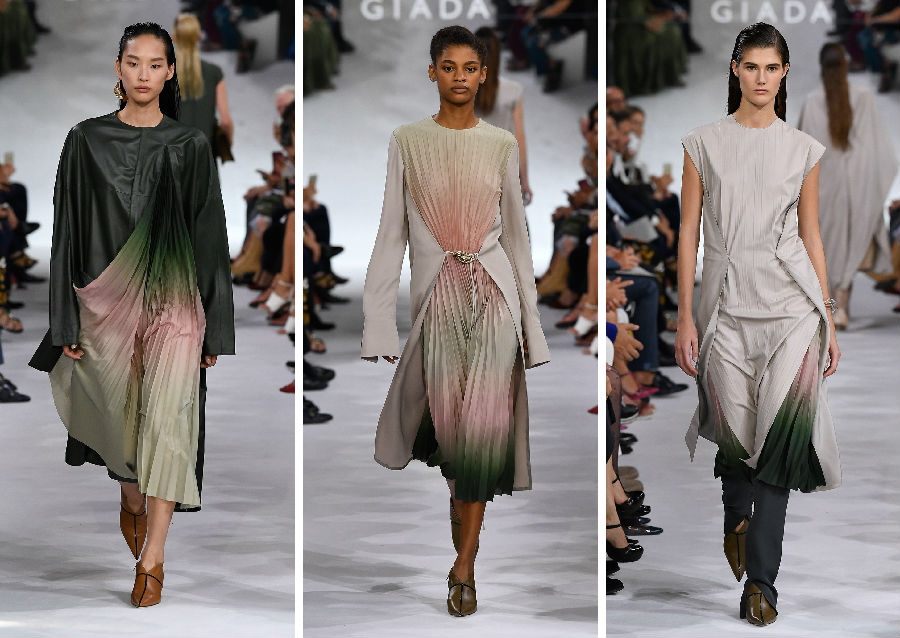 The shading also corresponds to a material transition in the narration of the collection. Traditionally winter fabrics take on a summer connotation. Cashmere is lightened to create double knit dustcoats. Wool becomes weightless when paired with fluid cotton, silk and viscose blends. 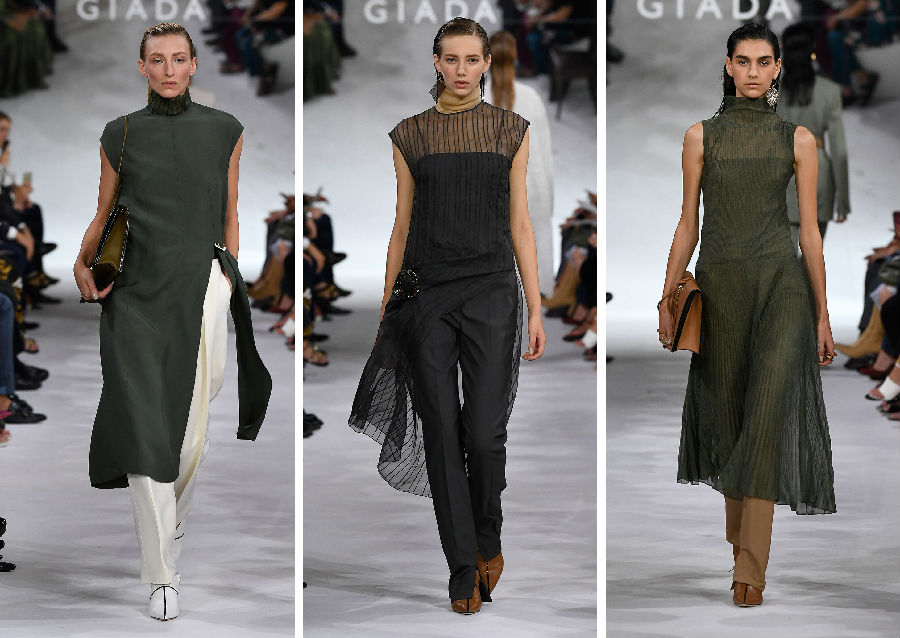 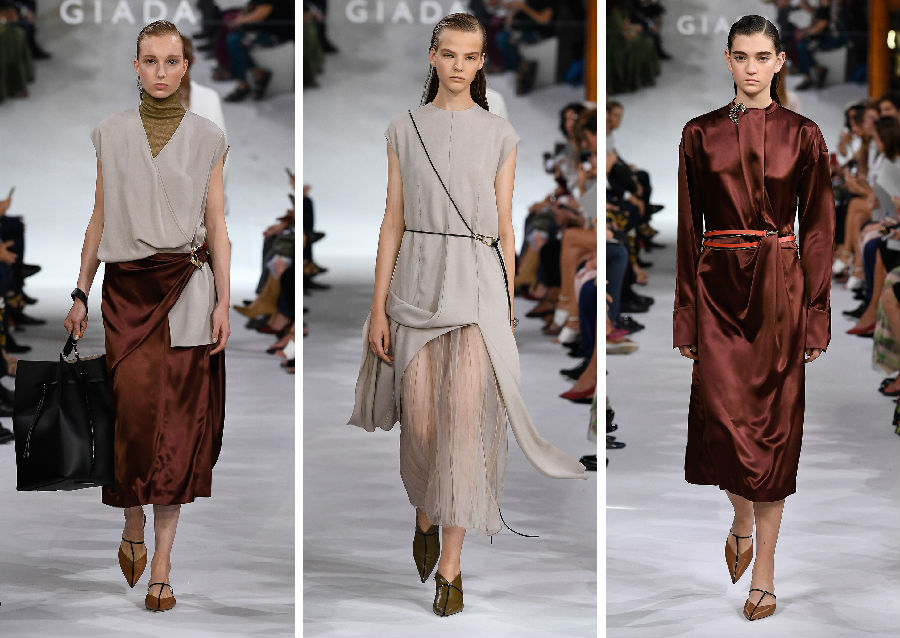 The volume of the pleats and folds animates fluid and elongated silhouettes, transforming the symmetry of the looks and giving life to original architectures. Starting with outerwear, Giada’s key item. Trench coats and coats are presented in ultra-light cashmere or double organza, while capes are characterized by two precious variations: an extra long in beige plonge nappa or super short in sheared mink fur. Dresses are crossed by micro stitching or hemstitched panels and thin organza ribs assembled one by one. Pants feature a side closure outlined by draping that recalls the necklines of the dresses, forming a long scarf or becoming part of a layering effect when presented in bi-color iridescent chiffon. 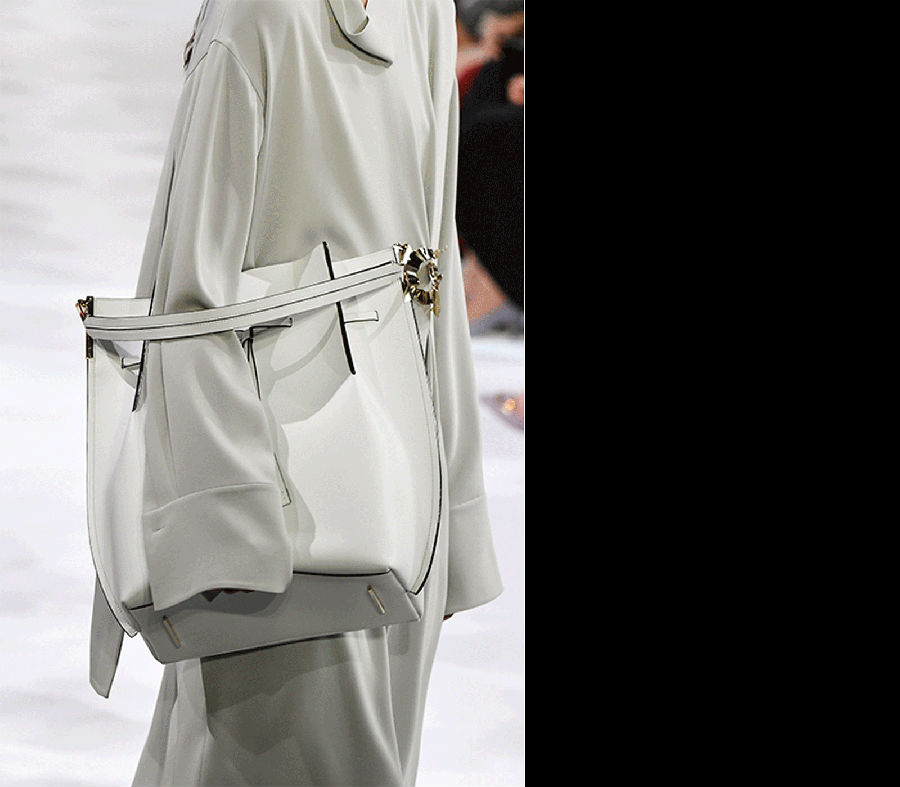 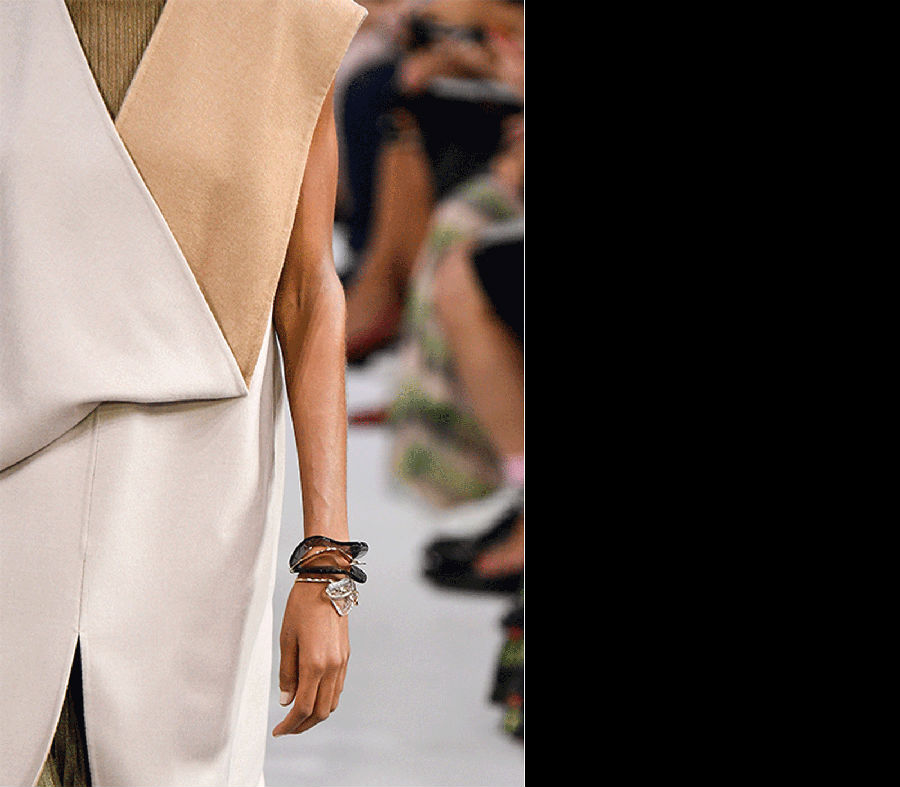 Handbags complete the looks, offering maxi bucket bags with double stitching and folder bags decorate by side and central ribbing dipped in black or featuring a metallic bar. Mini ankle boots and mules display a slim black patent stripe that enhances the construction and is embellished by plexi heels. 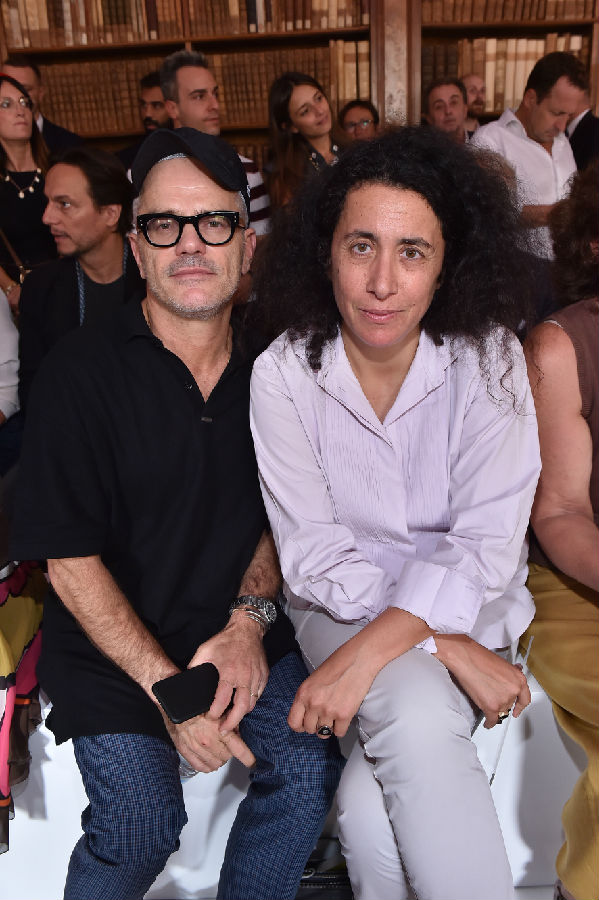 Giada’s grant will be allocated to the institutional and cultural activities of Biblioteca Braidense.

Sala di Lettura is one of the main hall of the historical complex, it is also the most ancient since it belongs to the earliest part of the building built in the XVI century. Since the very beginning this room was already projected and built as a library, it was originally reserved to the Jesuits as a private room for their lectures and studies, for this reason the original name was Sala Teologica. Today the room still hosts and preserves the original book collection of the Jesuits: a treasure of text works of Phililosophy and Theology from the XVI to the XVIII cent. It also holds one of the main collection of ancient dictionaries and encyclopaedia as well as paintings of the end of ‘700. 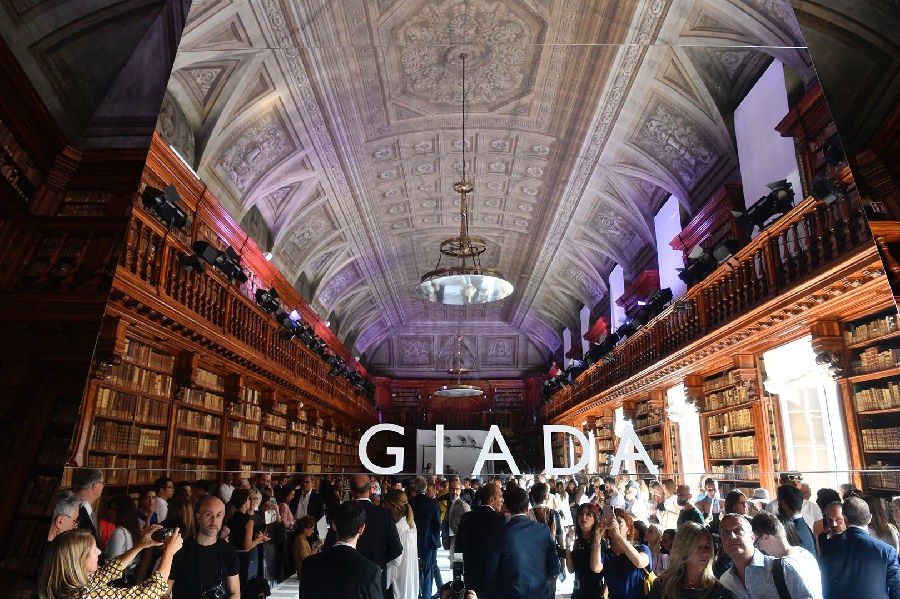 The wide ceiling is decorated with a fresco of the XVIII century representing allegories and symbolic figures of the Arts, of the Science and of Theology.

The restoration of this room will allow the preservation of a cultural treasure, the heritage of a building that among the centuries has hosted people belonging to culture, and has safeguarded the knowledge of art and philosophy.